Move to iOS Not Working? 6 Quick Tips to Fix It

Switching from Android to iPhone can be a difficult process, particularly if you don’t have the right tool for the job. Most people worry that since these two devices run on completely different platforms, the data on the Android device will be almost impossible to move to the iPhone. To address this problem, Apple developed the Move to iOS app, an all-round solution that allows you to easily move all data from the Android device to the iOS device very quickly and easily. All you have to do is connect the devices wirelessly and select the data to transfer.

But some users have reported several issues with Move to iOS. In this article, we are going to share with you what to do when Move to iOS doesn’t work as expected.

A simple restart of both devices can also help you easily fix this problem. So, before you attempt any more invasive fixes, you should try to restart both Android and iOS devices. The easiest way to do that is to turn them off, wait a few minutes and then turn them back on again. After restarting the devices, try using Move to iOS again to see if it works.

If you are still having trouble using Move to iOS, you can try to disable the Wi-Fi connection on the Android/iOS device and try using Mobile data instead. If the process still doesn’t work with mobile data, try switching back to Wi-Fi connectivity again.

This problem can also occur when one or both devices are running on outdated versions of firmware. Therefore, it is important to update the firmware on both devices before attempting to use Move to iOS again.

Tip 6: Alternative Way to Transfer Data from Android to iPhone

If you have tried all the solutions above and nothing works, it is time to consider an alternative way to transfer data from the Android device to you iPhone. The best third-party tool to help you in this case is Fucosoft iPhone Transfer. It is very easy to use, allowing you to transfer most types of data from Android to iPhone in a few simple steps as we shall soon see. But before we get to show you how to use this tool to transfer data from one device to another, let’s take a look at its features. They include the following:

Here’s how to transfer data from Android to iPhone in clicks:

Step 1: Download and install Fucosoft Phone Transfer on to your computer. Open the program as soon as installation is complete and in the main window, select “Phone Transfer” to get started.

Step 2: Now connect both devices to the computer and make sure that the Android device is the “Source” device and the iPhone is the “Destination” device. You can click on “Flip” if you need to change the order of the devices. 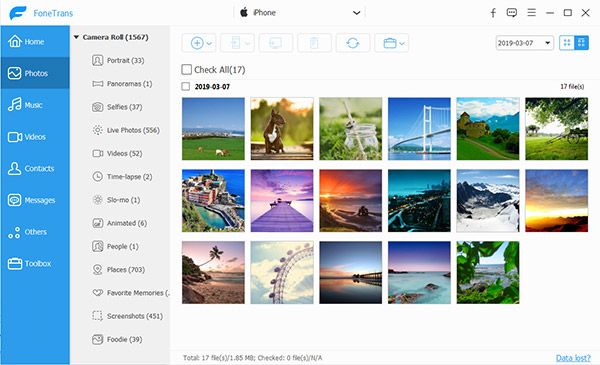 Step 3: Select the type of data you would like to transfer (You can select as many types of data as you need or even all of them) and then click “Start Transfer”, the program will begin transferring the data on the iPhone immediately. 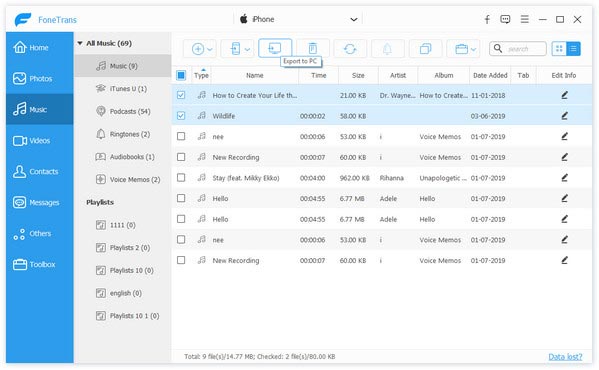 In a few minutes all selected files will be transferred to the iPhone and will be accessible on the device.